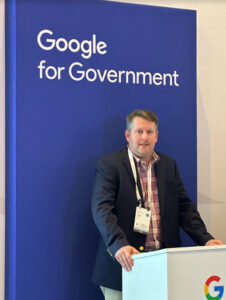 The Daston team enjoyed a day of networking and continuing education November 15 at the Google Government Summit, of which it was a Signature sponsor.

Google pulled out all the stops at this free event, held at The Anthem in Washington, DC. The summit drew thousands of attendees from the public sector, who were eager to learn how technology is helping government leaders achieve mission outcomes and unleash human potential.

“The entire event was phenomenal,” noted Joe Alston, Daston VP of Sales. “Google proved that it is committed to the public sector space and is engaging with federal, state, and local governments in an effort to help them meet their goals while adhering to government security standards.”

Callen added that Google specifically showed how it protects government agencies in the cloud with its BeyondCorp initiative. BeyondCorp began as an internal Google initiative to enable every employee to work from untrusted networks without the use of a VPN. Now, BeyondCorp is used by most Googlers every day to provide user- and device-based authentication and authorization for Google’s core infrastructure and corporate resources. “It is Google’s implementation of the zero-trust model,” Callen explained. “It builds upon a decade of experience at Google, combined with ideas and best practices from the community. By shifting access controls from the network perimeter to individual users, BeyondCorp enables secure work from virtually any location without the need for a traditional VPN.”

The Daston team took the opportunity to drive home how it differentiates itself from other Google resellers.

“We are more than just a reseller, we consult, advise, and design solutions for organizations in the public sector who have specific compliance requirements,” Alston said. “No one implements Google Cloud Platform and Google Workspace as well as we do, and being chosen as a Google Cloud Partner of the Year speaks volumes. We have an excellent reputation with Google, and that goes a long way.”